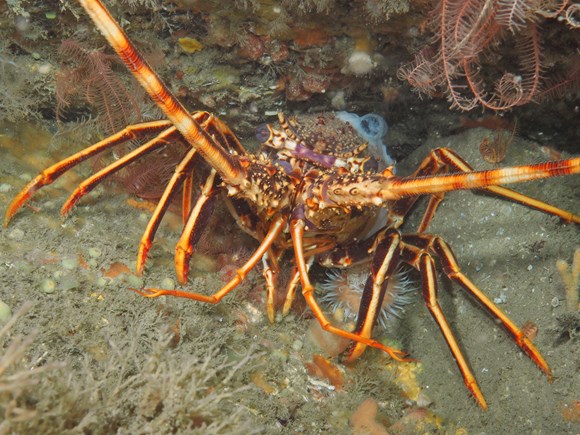 Researchers have deployed monitoring devices that will help them paint a comprehensive picture of the movements of an endangered marine species and the habitats it prefers to use.

Scientists from the University of Plymouth worked with the Isles of Scilly Inshore Fisheries and Conservation Authority (IoS IFCA) to deploy 12 acoustic receivers off the island of St Martins.

The Isles of Scilly and sites in northern France, off the coast of Brittany (Iroise Sea) and Côtes-d'Armor (Saint Brieuc and Sept-Iles marine park), are some of the last strongholds for the crawfish, where they are also important for small scale coastal fisheries, so information on how they move and behave is critical to ensuring their long term survival.

While on the Islands, the team engaged with local commercial fishermen and dive teams, with both groups tagging and releasing crawfish for the project.

One of the crawfish has already been spotted 200metres from where it was released, giving an early indication of how these animals travel around and make use of their habitat.

The deployment is part of FISH INTEL, a €4.1million project led by the University of Plymouth, and supported by €2.8million from the European Regional Development Fund via the Interreg France Channel England (FCE) programme.

Additional sites will also be set up in northern France by one of the project partners – Institut Français de Recherche pour l’Exploitation de la Mer (Ifremer) - and information will be freely shared between the sites to ensure lessons can be learned from both sides of the Channel/Manche region.

Together, it will contribute to a growing amount of data assessing the impact of fishing, climate change and other human activities – such as the development of offshore renewable energy sites and offshore mariculture – on the region.

Dr Thomas Stamp, Post Doctoral Research Associate at the University of Plymouth, led the survey work with Tom Hooper of the Isles of Scilly IFCA. Dr Stamp said: “This exciting survey work was the first of a collaborative project to get a better understanding on how specific species, such as crawfish, use coastal seas. This endangered species provides a critical income to small scale fishing communities, and therefore we really need to understand where they go and what they’re doing before appropriate fisheries management policies can be developed. The data that we gather will be combined from similar studies in northern France to develop robust fisheries management policies for this (and other) species across the FCE Channel/Manche region”

Since the project was launched in March 2021, researchers from the University have also processed a range of data generated by acoustic receivers from previous projects.

European bass have been detected living around an offshore mussel farm off the coast of Brixham, with tagged crawfish living in significant numbers under the farm.

The FISH INTEL project aims to tag a further 100 bass and 100 Pollock at the South Devon pilot site – which encompasses 10 estuaries, the Lyme Bay Marine Protected Area and several shipwrecks, as well as the mussel farm – over its duration.

FISH INTEL involves research organisations across the UK, France and Belgium who will work directly with fishers, regulators and industry representatives in the three countries.

Across seven sites the project will monitor marine species including European bass, Pollack, Crawfish and Bluefin tuna, which are considered commercially important for the region.

Ultimately, the research will assist authorities across the FCE region to implement Ecosystem Based Fisheries Management (EBFM) programmes with the aim of enhancing the condition and water quality in these habitats, as well as enabling activities – such as fishing, civil engineering projects and extract industries – to function in a sustainable way.

The FISH INTEL project has a total budget of €4.1m, of which €2.8m is funded by the European Regional Development Fund via the Interreg France (Channel) England Programme.

The partner organisations involved in the project are:

For more information about this news release, contact University of Plymouth Media & Communications Officer Alan Williams on 01752 588004 or email alan.williams@plymouth.ac.uk.

With a mission to Advance Knowledge and Transform Lives, Plymouth is a *top 50 research university with clusters of world class research across a wide range of disciplines including marine science and engineering, medicine, cybersecurity and psychology. A three-time winner of the Queen’s Anniversary Prize for Higher and Further Education, most recently in 2020 in respect of its pioneering research on microplastics pollution in the oceans and its impact on the environment and changing behaviour, the University continues to grow in stature and reputation.

It has a strong track record for teaching and learning excellence, and has one of the highest numbers of National Teaching Fellows of any UK university. With over 18,000 students, and a further 7,000 studying for a Plymouth degree at partner institutions in the UK and around the world, and over 140,000 alumni pursuing their chosen careers globally, it has a growing global presence.

About the Interreg FCE program

Interreg France (Channel) England (FCE) is an EU programme set up to foster economic development in the south of the UK and north of France by funding innovative projects which have a sustainable and economic benefit.

It focuses on a range of specific objectives including supporting innovation, improving the attractiveness of the FCE area and developing low carbon technologies.