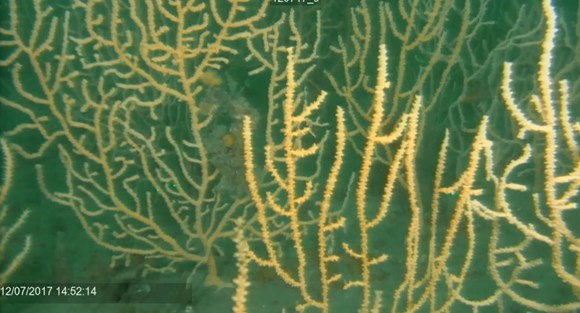 Extreme storms can result in major damage to the seabed similar to that caused by prolonged periods of bottom-towed fishing, according to new research. However, important seabed habitats and species recover more quickly following extreme storms than in the wake of such fishing activity.

That is one of the key findings of a first-of-its-kind study which examined the impact of the 2013/14 winter storms on the Lyme Bay Marine Protected Area (MPA), off the coast of southern England.

Academics from the University of Plymouth have been monitoring the area using underwater cameras and other techniques since 2008, when a ban on bottom towed fishing was introduced as part of a range of conservation measures.

They have previously demonstrated that several species have returned to the area since the MPA was introduced, resulting in the significant recovery of seabed life and fish and shellfish stocks.

However, there have been no previous studies looking at how extreme storms impact seabed habitats or the potential for MPAs to increase ecosystem resilience from storms.

To address that, researchers analysed the impacts of the 2013/14 series of storms, which separate studies by the University found to be the most energetic to hit western Europe since 1948.

Through annual surveys of seabed life in the MPA, they were able to see the immediate impact of the storms but also how the seabed was able to recover in subsequent years.

Writing in Frontiers in Marine Science, the researchers say that with extreme events likely to become more frequent and severe as a result of climate change, up to 29% of coastal reef MPAs around the UK may be similarly impacted by extreme storms.

Dr Emma Sheehan, Associate Professor of Marine Ecology at the University of Plymouth, is the study’s lead author. She said: “In our assessments in 2014, it appeared the previous winter’s storms had devastated the MPA. Loose sediments and other debris were prolific where life and biogenic reef habitat had been observed the year before. However, by 2016, large numbers of adult pink sea fans and other species were being observed once again with more juvenile pink sea fans than ever before. It showed the MPA’s recovery had begun almost immediately whereas, by contrast, it took more than three years for such patterns to be seen following its initial designation.”

The University’s work in Lyme Bay has been carried out in conjunction with local fishers and other community groups along the Dorset and Devon coastline.

In addition to assessing the effects of a ban on bottom-towed fishing, it has shown that limits on crab and lobster pot fishing could offer long-term benefits to fishermen and the environment.

Martin Attrill, Professor of Marine Ecology at the University and the current study’s senior author, added: “Given the sheer power of extreme storms, there is very little that can be done to prevent widespread damage being caused when they occur. However, as such storms are likely to become more frequent as a result of climate change, a large proportion of the UK’s coastline could experience extreme wave conditions similar to or greater than those seen in Lyme Bay in 2013/14. What we therefore need to do is expand protection measures which improve the general health of the seabed and enhance its powers of resilience and recovery.”

With a mission to Advance Knowledge and Transform Lives, Plymouth is a *top 50 research university with clusters of world class research across a wide range of disciplines including marine science and engineering, medicine, cybersecurity and psychology. A three-time winner of the Queen’s Anniversary Prize for Higher and Further Education, most recently in 2020 in respect of its pioneering research on microplastics pollution in the oceans and its impact on the environment and changing behaviour, the University continues to grow in stature and reputation.

It has a strong track record for teaching and learning excellence, and has one of the highest numbers of National Teaching Fellows of any UK university. With over 18,000 students, and a further 6,000 studying for a Plymouth degree at partner institutions in the UK and around the world, and over 140,000 alumni pursuing their chosen careers globally, it has a growing global presence.